Right for plaintiffs to waive their lawyer

Waiving one’s right to a lawyer means choosing to present oneself in a judicial proceeding without the assistance of a lawyer. A ‘plaintiff’ is the person who initiates a civil legal action.

For information on the age at which child suspects/offenders as well victims can waive their right to a lawyer, see our interactive data explorer. 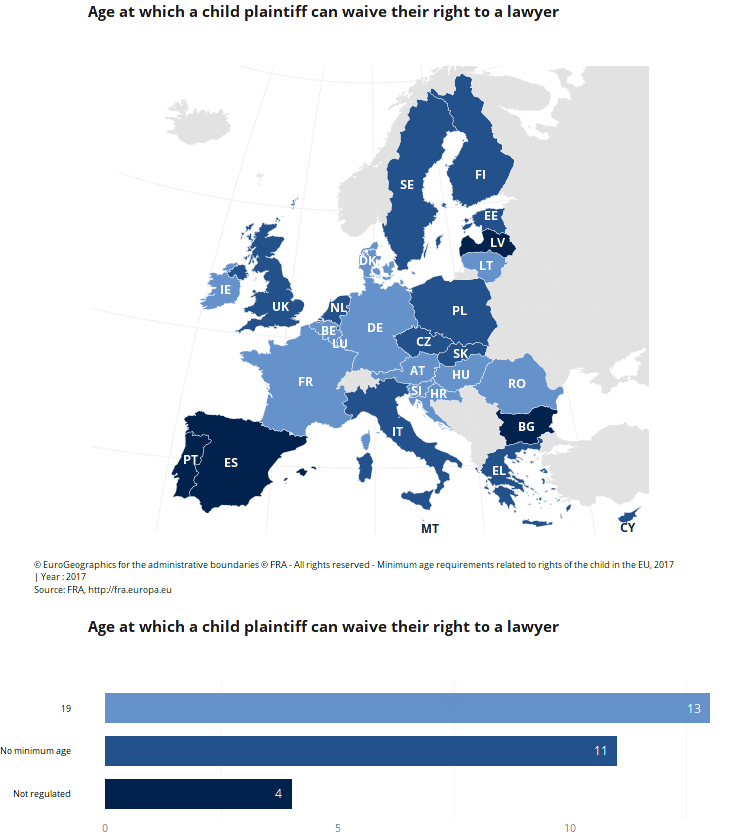 The conditions for waiving the right to a lawyer in the case of persons suspected or accused of crime are laid down in Article 9 of the Access to a Lawyer Directive. Member States, however, may require the presence or assistance of a lawyer in their national legislation.

Concerning children, the Directive on special safeguards for children does not contain any provision similar to Article 9 of the Access to a Lawyer Directive. To the contrary, its Article 6 (2) stipulates that “Member States shall ensure that children are assisted by a lawyer in accordance with this Article in order to allow them to exercise the rights of the defence effectively”. Article 6 (6) specifies that EU Member States shall ensure the assistance of children by a lawyer “(a) when they are brought before a competent court or judge in order to decide on detention at any stage of the proceedings within the scope of this Directive; and (b) during detention”. Member States shall also ensure that “deprivation of liberty is not imposed as a criminal sentence, unless the child has been assisted by a lawyer in such a way as to allow the child to exercise the rights of the defence effectively and, in any event, during the trial hearings before a court”. Consequently, even though waiving their right to a lawyer is not explicitly excluded for children, Member States are obliged to provide for legal assistance and effective defence of child suspects/offenders in criminal proceedings. The Victims’ Rights Directive, however, includes no such provision.