Sexual offences are unlawful acts that result in the sexual exploitation and sexual abuse of a person. The age and gender of the victim or of the offender are sometimes considered when setting sanctions for such offences. 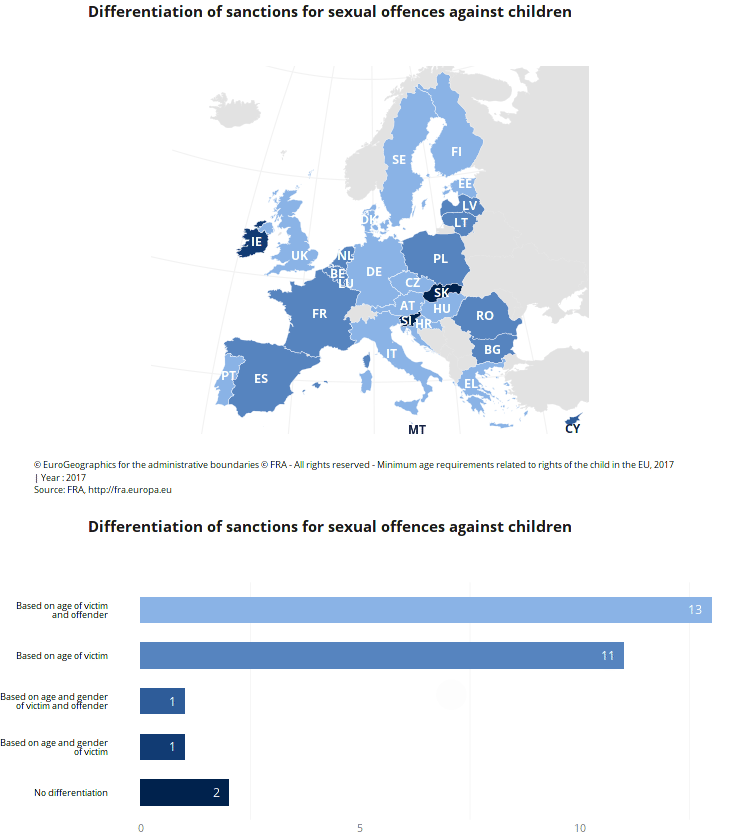 Sexual offences are “destructive to children’s health and psycho-social development” (Preamble of the Council of Europe Convention on the Protection of Children against Sexual Exploitation and Sexual Abuse, Lanzarote Convention, adopted in 2007 and ratified by almost all EU Member States). Moreover, they “constitute serious violations of fundamental rights, in particular of the rights of children to the protection and care necessary for their well-being, as provided for by the 1989 United Nations Convention on the Rights of the Child and by the Charter of Fundamental Rights of the European Union” (Recital 1 of the Directive on combating the sexual abuse and sexual exploitation of children and child pornography).

The directive is a tool for approximating criminal law and obliges Member States to provide for appropriate criminal penalties in this field. Nonetheless, it leaves to Member States the power to regulate the age threshold for certain consensual sexual activities involving peers. Article 8 (1) provides that it lies within the discretion of Member States to apply different criminal treatment of persons in the case of consensual sexual activities between peers, who are close in age and degree of psychological and physical development or maturity, under the condition that these activities do not involve any abuse. The directive, moreover, does not restrict the power of Member States to adopt and implement specific criminal policies regarding child offenders. In the context of the directive, neither the child victim’s nor the offender’s gender is relevant.