Special procedural safeguards for child victims involved in criminal proceedings – such as audio-visual recording or interviews conducted by specialised personnel – aim to ensure a child-friendly environment, so that children can exercise their right to access justice, and more specifically their right to a fair trial, in an effective and secure manner. These safeguards should also foster their social reintegration.

To decide what measures to apply, children’s specific needs according to their age and maturity are taken into consideration. 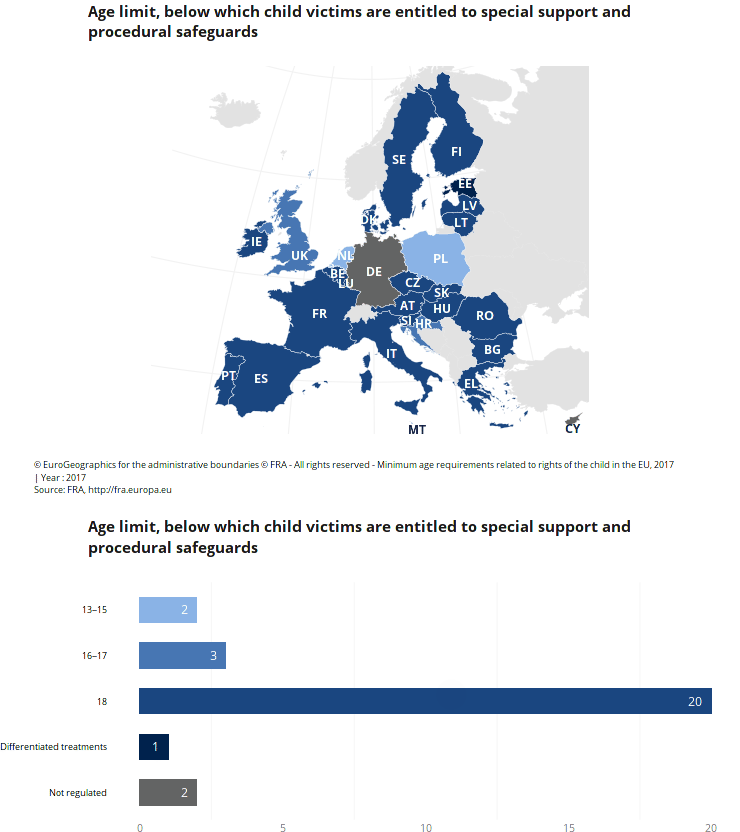 Regarding child victims, other procedural safeguards are provided by the Victims’ Rights Directive. In this respect, child victims have, for instance, the right to the protection of their privacy (Article 21). Of critical importance is child victims’ right to an individual assessment to identify their specific protection needs and to determine whether they should benefit from special protective measures in the course of criminal proceedings (Article 22). Special protective measures include, for instance, interviews carried out in appropriately designed or adapted premises and conducted by the same person and in a gender sensitive manner; measures to avoid visual contact between victims and offenders; as well as allowing a hearing to take place without the presence of the public (Article 23). Article 24, moreover, obliges EU Member States to ensure that in cases of child victims, all interviews with a child may be audio-visually recorded and that these recorded interviews can be used as evidence in criminal proceedings. Article 24 (2) prescribes that, in the case of doubt about a victim’s age, the victim has to be presumed to be a child if there are reasons to believe so.