Child offenders, as a rule, should not be detained together with adults. However, children may be detained together with “young adults”, meaning young persons who have reached the age of 18. Deciding up to which age a person may be considered a “young adult” lies within the powers of Member States. The Directive on special safeguards for children, however, encourages Member States to set the upper limit for the definition of “young adult” at 24 years.

FRA’s research also covered the issue of newborns being detained with their parents in prison, since such young children could be in need of their parents. The data on the age from and up to which a child can stay in prison with its parent, when the latter is imprisoned can be found in the data explorer.

The research also dealt with the age at which children can be placed in solitary confinement when detained. This means that they are held separately from other detainees for a limited period of time as a disciplinary sanction, for the child’s protection, or as a preventive measure. The relevant data on this can be found in the data explorer. 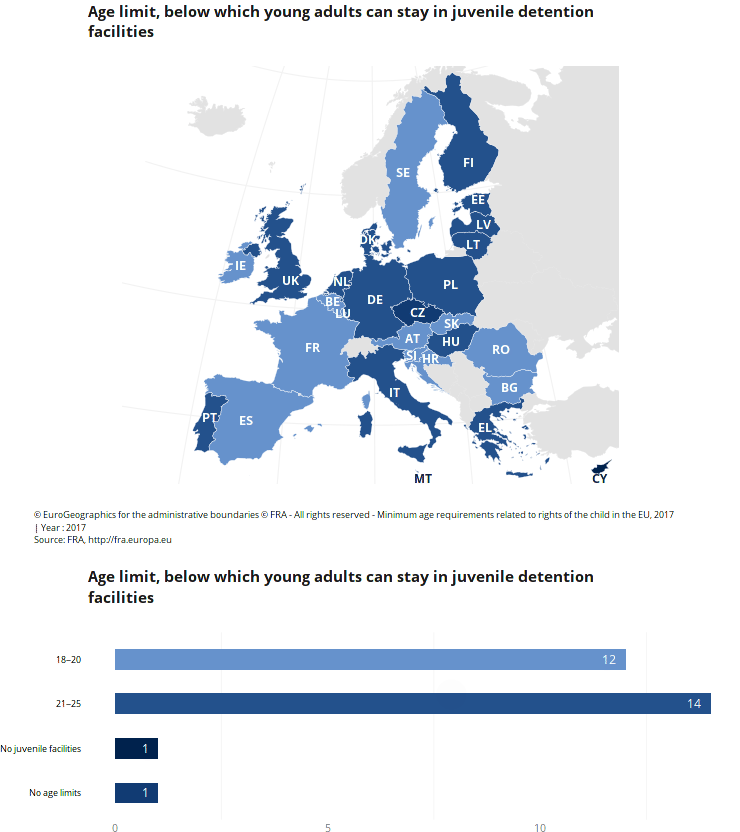 Following the best interests of the child principle, child offenders, as a rule, should not be detained together with adults. Article 12 (1) of the Procedural Safeguards Directive provides that “Member States shall ensure that children who are detained are held separately from adults, unless it is considered to be in the child’s best interests not to do so”. The same rule also applies in the case of children in police custody (Article 12 (2)). This rule follows the requirements set by Article 31 (c) of the Convention on the Rights of the Child and Article 24 of the EU Charter of Fundamental Rights.

Children under 18, however, may be detained together with young adults, since Article 12 (3) of the Directive on special safeguards for children provides that persons who have reached the age of 18 (young adults) may continue to be held separately from other adults and stay with children. In this case, though, national authorities should assess the situation in relation to the best interests of the children detained with these young adults (Article 12 (4)).

The decision regarding up to which age persons should be considered “young adults” and thus be able to continue to stay together with children in the same facilities lies within the powers of EU Member States. In Recital 49 of the directive, however, “Member States are encouraged to determine that persons older than 24 years do not qualify as young adults”.