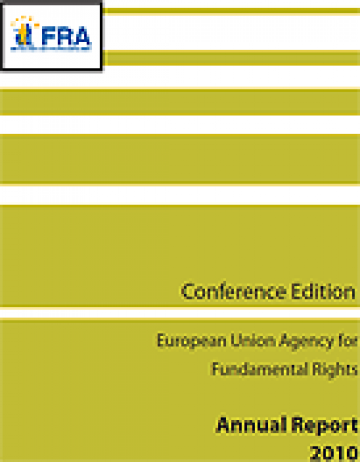 Protection mechanisms on paper do not yet fully function in practiceThe 2010 Annual Report of the European Union Agency for Fundamental Rights (FRA) identifies challenges in the areas of data protection, extreme exploitation in the workplace, rights of the child, racism and discrimination, and LGBT (Lesbian, Gay, Bisexual and Transgender) issues.

The FRA 2010 Annual Report provides concrete and comparative data on the situation on the ground in the 27 EU Member States. It also provides advice to the EU institutions and Member States, based on the evidence found.

The Agency's surveys and studies undertaken in 2009 in particular show that many equality bodies, national human rights institutions and data protection authorities lack resources, are not independent enough, and often have very weak mandates. Many separated asylum-seeking children disappear whilst their case is being processed. LGBT (Lesbian, Gay, Bisexual and Transsexual) persons suffer discrimination in areas of everyday life, such as at work or in bars. Racism continues to be a part of everyday life for many immigrants and minorities living in the EU, and the majority of EU Member States do not keep official records of racist crime.

Please consult the original ENGLISH version of the press release and media memo. The Fundamental Rights Agency cannot guarantee the accuracy of translated versions of these documents.