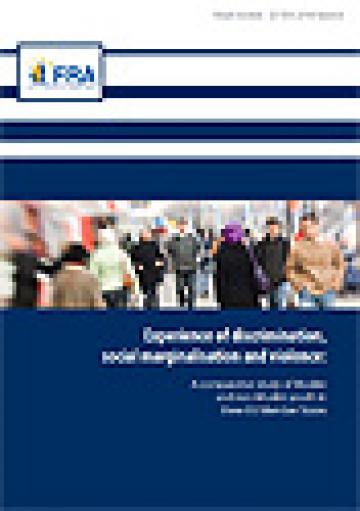 The European Union Agency for Fundamental Rights (FRA) is publishing results from a survey of 3,000 Muslim and non-Muslim young people about their experiences of and attitudes towards discrimination, social marginalisation and violence. The results indicate that in the three Member States where the survey took place (France, Spain and the United Kingdom) most young people - regardless of their religious background - do not support violence. On the other hand, those young people who have been victims of discrimination or violence are at greater risk of engaging in violence themselves.

Figure 1: Experience of being unfairly picked on (%)

Many of the young people surveyed have experienced violence (ranging from bullying and other forms of emotional violence to more physical forms of aggression). It was also found that there is a strong link between being a victim and being an offender.

In all three Member States surveyed, young people who felt socially marginalised, and those who had been a victim of violence because of their cultural or religious background, skin colour or language, were more likely to use emotional violence (such as teasing or bullying) towards others than young people who did not feel socially marginalised or those who had not been victimised for the above-mentioned reasons.

Overall, there is a low acceptance of violence among young people, and there is no direct link between attitudes supporting violence and actual engagement in violence.

Experience of Discrimination, Social Marginalisation and Violence: a comparative study of Muslim and non-Muslim Youth in three EU Member States

This report presents the findings of a research study conducted by the FRA during 2008-2009 in France, Spain and the United Kingdom. 1,000 young people between the ages of 12 and 18 in each of the three Member States were surveyed - in total, 3,000 young people took part in the survey.

The survey focused on three EU Member States that have experienced terrorist attacks associated with radical Islam or urban unrest related to immigrant youth with a predominantly Muslim background. The research set out to explore the experiences and attitudes of both Muslim and non-Muslim young people in these countries with a view to providing results that are of use to those formulating policies to address discrimination, social marginalisation and integration.

The FRA survey set out to explore possible relationships between young people's experiences of discrimination and social marginalisation, including experiences of racism, and their attitudes towards and actual engagement in violent behaviours.

The report and a two-page summary are available at http://www.fra.europa.eu/