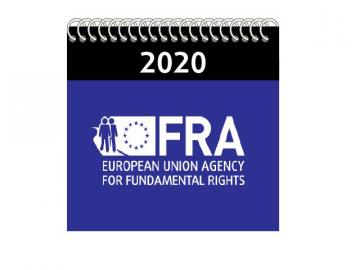 This year FRA looks forward to a new decade for fundamental human rights across Europe, as the new European Parliament and Commission hit the ground running with a raft of new strategies promoting and protecting rights.
Explore the 2020 scheduled products

These will cover such issues as migration, child rights, disability, Roma, ageing, integration and artificial intelligence to name just a few. As the EU’s unique and independent centre of human rights excellence, these are all areas FRA actively engages in.

Worryingly, some governments across the EU are rolling back on their human rights commitments. This erodes public trust in the democratic institutions that are there to protect them.

To capture the mood of the people and their experiences, FRA carried out a landmark survey right across the EU, its Fundamental Rights Survey.

This general population survey focuses on situations that people in the EU face in their everyday lives – from a fundamental rights perspective –ranging from data protection to equal treatment, access to justice, consumer rights and good administration.

A staple of every year, FRA will draw attention to the various human rights achievements and challenges facing Europe in its annual Fundamental Rights Report 2020.

This year, the focus will be on the national application of the EU’s Fundamental Rights Charter. The European Commission could draw on this as it focuses on a new strategy to capitalise on the Charter’s untapped potential, one decade after it came into force.

Alongside the rights issues the general public experiences, FRA will also tell the story of specific groups that particularly face discrimination and inequalities.

Our landmark EU-wide survey of lesbian, gay, trans, bisexual and intersex people builds on FRA’s 2012 survey but this time it also captures the experiences of intersex people. It will reveal the everyday experiences of being LGBTI in Europe and the daily challenges they face from discrimination to harassment for simply being themselves.

With over 140,000 respondents, it promises to provide rich input to the European Commission, as it reshapes its list of actions to advance the rights of LGBTI people across the EU.

In particular, FRA will show what it is like to be Roma in Belgium, France, Ireland, the Netherlands, Sweden and the United Kingdom.

These findings will complement its large body of work on Roma and help feed the EU’s next Framework on Roma inclusion.