Migration: Worsening conditions for migrants and refugees across Europe 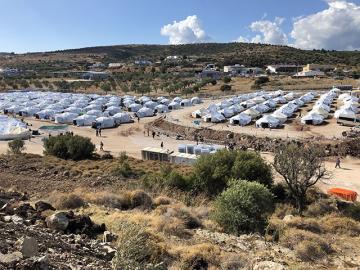 The Coronavirus pandemic continues to severely affect migrants and refugees. Difficulties to enter the EU, increasing reports of pushbacks and violence at the borders, and worsening conditions in reception centres are some of the main concerns the EU Agency for Fundamental Rights (FRA) identifies in its latest migration quarterly bulletin. At the same time, the European Commission’s new Migration and Asylum Pact kicks off new discussions about the future EU migration and asylum framework.

In September, the Moria camp on Lesvos burned down, leaving about 12,000 people without shelter. Most of them were transferred to an emergency site, which was later flooded. This prompted renewed calls for a dignified and long-term solution for people seeking asylum in Greece.

During his visit to Moria in October, FRA’s Director Michael O’Flaherty offered the Agency’s support to meet international human rights standards as new facilities are developed.

Situation at the border

Both at land and sea borders, the number of reported pushbacks is increasing.

As the Coronavirus pandemic situation abated in summer, the number of migrants and refugees arriving to Europe increased again.

Over 300 people have died or gone missing while trying to reach European shores. Moreover, authorities in many countries do not allow ships to land in their ports, leaving people stranded at sea. Many migrants are also attempting to cross the Channel.

The number of asylum applications is still significantly below pre-COVID-19 levels.

Many national authorities managed to reduce the backlog of asylum applications despite the Coronavirus challenges, but applicants still face long waiting times. Access to the asylum procedures remains complicated – applicants lack information and legal support. Many family reunification procedures are on hold because of the pandemic.

In some countries, arrivals are not promptly registered, which prevents access to accommodation and food. In others, migrants have to undergo a quarantine in undignified conditions.

After the fires in Moria, a number of countries – such as Belgium, Bulgaria, Croatia, Finland, France, Germany, Italy, Luxembourg, the Netherlands, Portugal and Slovenia – committed to relocate 400 unaccompanied children who had been living in the camp.

On 23 September, the European Commission published a new Pact on Migration and Asylum. It sets out a new approach to migration and asylum management in the EU, with a stronger focus on border procedures, improving cooperation with the countries of origin and transit, successful integration of refugees and return of those with no right to stay.

The latest migration quarterly bulletin covers the period between 1 July and 30 September 2020. FRA has been regularly collecting data on migration since September 2015.