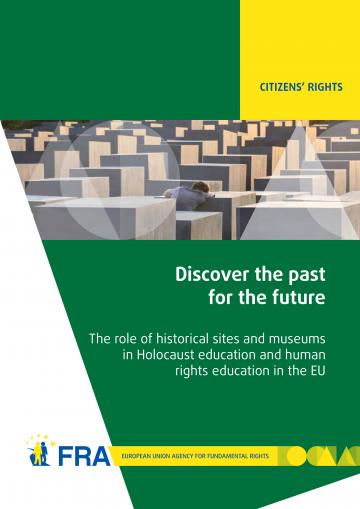 In 2009, the FRA conducted the first EU-wide study of the role that European memorial sites, museums and exhibitions play with respect to educating young Europeans about the Holocaust and human rights. The findings of the study were presented at a Conference in Auschwitz on the 27 January bringing together Education Ministers from across Europe.

Memorial sites as transmitters of moral values as well as of historical facts
Confrontation with the Holocaust can always lead discussion of contemporary issues. The findings of the survey, however, show that only one of the surveyed sites regarded raising awareness about human rights as its most important objective. All other institutions regarded the transmission of historical knowledge as their main focus.

"If you feel something, it sticks"
Many of the interviewed students expressed that the confrontation with the Holocaust has had an impact on their personal lives, particularly with regard to visits to memorial sites. Students perceived memorial sites as places that could have a lasting impression on them.

The authenticity of memorial sites
The findings of the survey show that the authenticity of memorial sites had two key effects upon the students. On the one hand, it created an atmosphere of emotional attachment that triggered reflection, and encouraged visitors to seek to learn more. On the other, however, emotional experience and expectations regarding specific rules of behaviour at memorial sites had occasionally made students insecure and blocked communication as well as reflection.

Read more about the reports and its key findings in the documents at the end of the page.

FRA report released at Ministerial Conference in Auschwitz on 26 January

FRA releases the findings of the first EU-wide study on the role of historical sites and museums in teaching about the Holocaust and human rights at a Ministerial Conference on 26 January 2010 in Auschwitz on the 2010 International Remembrance Day for the Victims of National Socialism.

The study was conducted by the Living History Forum in Sweden, with the assistance of academics and practitioners from memorial sites, museums and universities. The study also involved an examination of the literature on Holocaust education and human rights education at commemoration sites and museums, a survey of ministries in all EU Member States, a survey of 22 Holocaust-related sites and historical museums, focus group discussions with teachers and students in 9 EU Member States (United Kingdom, France, Netherlands, Austria, Germany, Czech Republic, Poland, Italy and Lithuania), on-site research at 14 memorial sites and historical museums and interviews with pedagogical experts and curators of said sites.