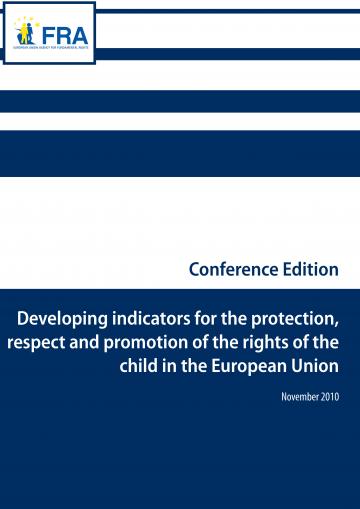 Developing indicators for the protection, respect and promotion of the rights of the child in the European Union (Conference edition)

The development of indicators for the protection, respect and promotion of the rights of the child in the European Union by the FRA aims at assessing the impact of Union law and policies that have been adopted so far, identifying their achievements and revealing their gaps on EU provisions for children.

Following the 2006 European Commission Communication ‘Towards a Strategy on the Rights of the Child', the Commission asked the EU Fundamental Rights Agency (FRA), in July 2007 to develop indicators to measure how child rights are implemented, protected, respected and promoted across the EU. As the FRA is neither a standard setting nor a treaty monitoring body, these indicators are not intended to monitor compliance with international standards and conventions, but to guide the Agency's data collection and research, allowing it to develop evidence-based opinions. This aims at supporting the Community's institutions and Member States when they take measures or formulate actions. The indicators also provide a good example that EU Member States could themselves consider applying.

The situation of many children across the EU is worrying. Although the EU region is one of the most affluent and developed in the world, according to Eurostat 19% of its children aged 0-16 are at risk of poverty. Children often suffer violence within the family, community, residential care and other settings. Many children belonging to migrant and minority groups, such as Roma and Travellers continue to face, directly or indirectly, discrimination in education. Children continue to be trafficked and smuggled into and across EU Member States and too many continue to be placed in institutions.

FRA has developed a series of indicators for the protection, respect and promotion of the rights of the child in the EU on the basis of EU competence in this area. This report proposes a series of indicators under the following key areas, which are in line with existing EU provisions of direct relevance to children:

These indicators are not intended to monitor compliance with international standards and conventions but to guide the Agency’s data collection and research, allowing it to develop evidence-based opinions.

The indicators presented in this report "constitute a starting point rather than a definitive result, requiring continued refinement and expansion in response to emerging data, and legal and policy developments. In this light, this FRA report is as much about process as it is about product" -  FRA Director Morten Kjaerum.

Developing indicators for the protection, respect and promotion of the rights of the child in the European Union

The indicators developed by the FRA presented in this report should be seen as a step towards a coherent, considered approach to the development, application, monitoring and review of EU law and policy affecting children. They constitute an initial toolkit to evaluate the impact of EU law and policy on children’s status and experience across various fields.