Are there guidelines on how to make polling stations accessible?

The analysis below focuses on whether detailed guidance on accessibility, which covers at a minimum physical accessibility, in available in the EU Member States. This reflects the focus of many national level guidelines on the accessibility needs of persons with physical impairments.

Are guidelines on how to make polling stations accessible in place in the EU Member States? 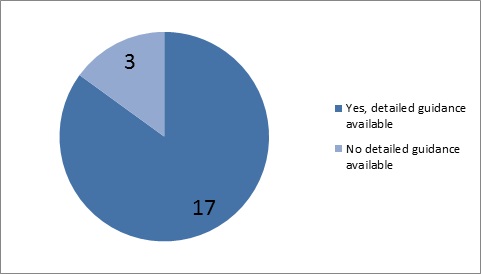 Detailed national guidance on ensuring the physical accessibility of polling stations is available in over half (17) of EU Member States. In Belgium, Denmark, and the Netherlands, the guidance is issued by government departments. In Denmark, guidance is issued to the municipal authorities responsible for organising elections ahead of each vote, and includes a requirement that within each polling station there should be at least one voting booth with room for three people, for example a voter with disabilities and two election officials, or one election official and a personal assistant. In other Member States, the guidance is provided by election authorities or national human rights bodies. The Portuguese National Electoral Commission, for instance, issued a recommendation and guidance to municipal election authorities on the accessibility of polling stations following a complaint by a national disability organisation.

DPOs have often played an active role in producing accessibility guidance for polling stations. In Latvia, collaboration between the Central Elections Commission and two NGOs has resulted in the publication of booklets containing guides to accessibility and non-discrimination for disabled people.

In three EU Member States, Cyprus, the Czech Republic and Hungary, however, the research found no detailed guidance on the accessibility of polling stations. For example, although guidance is issued to election authorities by the Central Election Service of the Cypriot Ministry of Interior, it contains no details on accessibility.

Indicators on the right to political participation of people with disabilities