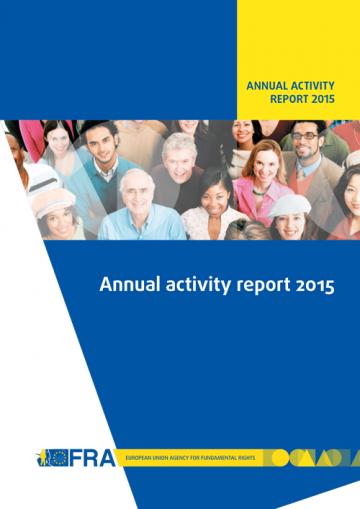 This consolidated annual activity report provides an
overview of the European Union Agency for Fundamental
Rights (FRA) activities and achievements in 2015. It
follows the guidelines of the EU Agencies Performance
Development Network.

In 2015, FRA strongly focused on fundamental rights challenges arising due to the significant increase in refugees and migrants coming to the European Union (EU). In the course of the year, over one million refugees and migrants arrived in Europe by sea, mainly in Italy and Greece. In response, FRA rearranged its priorities and stepped up its activities in the area of ‘Immigration and integration of migrants, visa and border control and asylum’. A high share of publications, activities and events in this thematic area also reflect this change in priorities.

In line with its mandate and its objective to provide assistance as well as to formulate evidence-based advice in the form of opinions to the EU institutions and Member States, FRA offered its expertise at 240 presentations and hearings at EU- and Member State- levels, as well as at events other international organisations organised during the year. The agency itself organised 60 events, bringing together its key partners and stakeholders to discuss fundamental rights issues in various thematic areas.

Several FRA findings fed into the work of EU institutions and Member States, including references in several European Parliament resolutions and different Council of the EU documents. Highlights of the year 2015 include extensive references to the results of FRA’s EU-wide survey on gender-based violence against women in the European Parliament resolution on ‘Progress on equality between women and men in the European Union in 2013’; these also fed into a resolution on the ‘EU Strategy for equality between women and men post 2015’. The latter resolution also referenced FRA’s reports on Discrimination against and living conditions of Roma women in 11 EU Member States and on Being Trans in the EU – Comparative analysis of the EU LGBT survey data.