Asylum, migration and borders
This note draws on past FRA materials on the fundamental rights of migrants in an irregular situation who cannot be removed. It draws attention to the obligation of EU Member States to provide them with a certification of postponement of removal and to grant them access to core fundamental rights.

In 2011, a FRA report found that EU institutions and Member States should pay more attention to the situation of migrants in an irregular situation who have been issued a return decision but who have not been removed. It called on Member States to avoid situations where people who are not removed remain in legal limbo for many years.

Current EU policy developments bring this issue again to the forefront, as some legislative and policy measures to speed up asylum procedures could lead to rejections of application of people who need international protection, for example, because of not cooperating with the authorities. Human rights considerations may prevent their removal; this will increase the number of migrants staying in the EU in a legal limbo. This will not only affect their fundamental rights but also pose new challenges to EU Member States, which are undesirable from the human security and the public order perspectives. 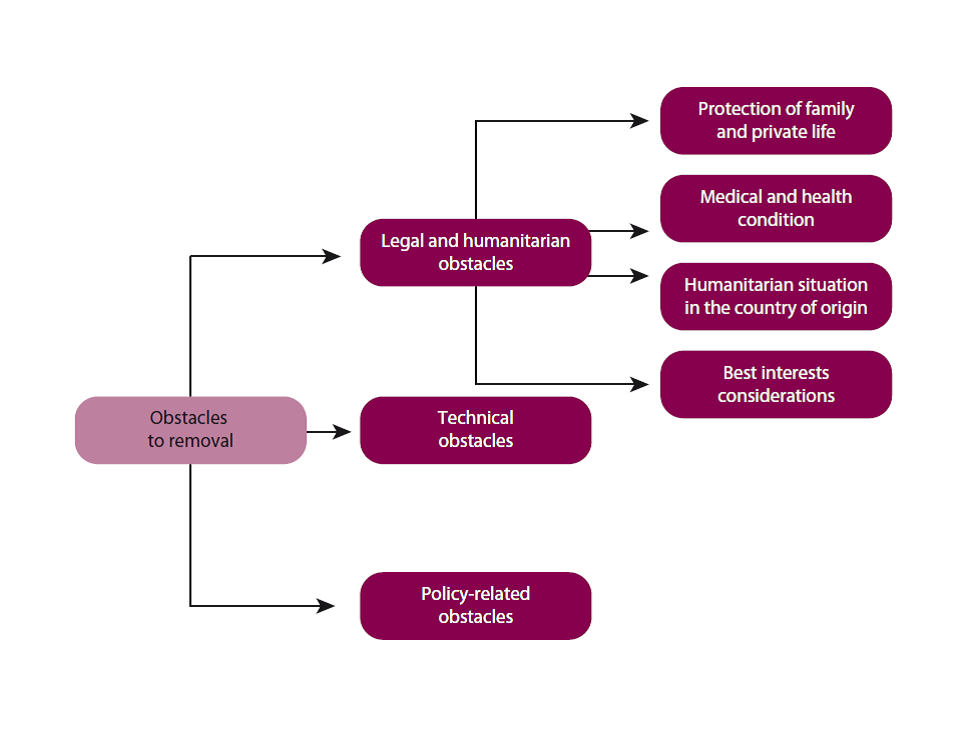 The situation of third-country nationals who are staying illegally but who cannot yet be removed should be addressed. Their basic conditions of subsistence should be defined according to national legislation. In order to be able to demonstrate their specific situation in the event of administrative controls or checks, such persons should be provided with written confirmation of their situation.

(1) Member States shall […] ensure that the following principles are taken into account as far as possible in relation to third-country nationals […] during the period for which removal has been postponed […]:

(a) family unity with family members present in their territory;

(b) emergency healthcare and essential treatment of illness;

(c) minors are granted access to the basic education system for minors (subject to the length of their stay);

(d) considerations to the special needs of vulnerable persons

(2) Member States shall provide the persons [concerned] with a written conformation in accordance with national legislation […] that the return decision will temporarily not be enforced.

The provision of emergency health care is a basic minimum right and access to it must not be made dependent on the payment of fees.

Access to education: The limitation of “subject to the length of their stay” should be interpreted restrictively. In cases of doubt about the likely length of stay before return, access to education should rather be granted than not be granted. […] As regards practical problems, such as cases in which the minor does not have a document proving the education already obtained in other countries or cases in which the minor does not speak any language in which education can be provided in the Member State, appropriate answers need to be found at national level, taking into account the spirit of the Directive and relevant international law instruments such as the 1989 Convention on the Rights of the Child and General Comment No. 6 thereto. Inspiration may also be drawn from the asylum acquis […].

Other basic needs: In its judgement in case Abdida (C-562/13), the [Court of Justice of the European Union (CJEU)] found that Member States are obliged to also cover other basic needs, in order to ensure that emergency health care and essential treatment of illness are in fact made available during the period in which that Member State is required to postpone removal. It is for the Member States to determine the form in which such provision for the basic needs of the third country national concerned is to be made.

Form of the written confirmation: Member States enjoy wide discretion. The confirmation can either be a separate paper issued by the national authorities or part of a formal decision related to return. It is important that it allows the returnee to clearly demonstrate – in case of a police control – that […] he/she is subject of a return decision which can temporarily not be enforced. The confirmation should specify, if possible, the length of […] the postponement.

In Member States in which data exchange systems allow for the quick verification of the status of irregular migrants in case of police controls on the basis of certain personal data or reference numbers, the written confirmation requirement can be considered as fulfilled if the person is provided with (or already owns) documents or papers containing these personal data or reference numbers.