In order to communicate well with the public, institutions need to communicate unlike institutions. They must acquire qualities of speed, agility, flexibility, imagination and novelty, and experiment boldly with new approaches, especially in the rapidly evolving sphere of social media. To this end, FRA brought together an unusually wide range of disciplines and professions to share experiences on how to better communicate fundamental rights and freedoms in a world that is growing increasingly intolerant.

The following report is a distillation of conclusions (not formally adopted) and views, based on two days of presentations and lively debate, and combined with written and recorded contributions subsequently submitted by several experts unable to attend in person.

This meeting was convened by the Agency for Fundamental Rights (FRA) in response to the urgent need to more effectively communicate, at every level, the fact that rights and freedoms belong to all. FRA’s Director, Michael O’Flaherty, spoke in his opening address of FRA’s core aim, which is to support the dignified life of everyone in the European Union through the prism of human rights commitments, and of how effective communication is therefore about sustaining support for those rights, influencing change leaders and raising awareness among rights holders. If those with a mandate to monitor, implement, promote or advocate human rights fail in this central mission, then political and media agendas will be hijacked by others who are determined to dismantle the human rights framework.

There is now widespread understanding that misdirected public opinion has the potential to undermine even the most firmly established institutions and instruments, and that therefore many human rights organisations are paying the price for leaving public attitudes largely unattended. The meeting’s participants therefore chose to focus, without exception, on a single, vast target group for improved communication: the general public. Communicating with the media is, in general, a means to this end. One expert astutely observed that the same messages and communications that would sway public opinion would prove equally effective in swaying more traditional advocacy targets such as elected politicians and business leaders: in part because these groups are eager to put themselves on the same wavelengths as their electorates and customers, and in part because their expertise or professional roles do not prevent them from responding to messages, cognitively and emotionally, much like everyone else. (Policy makers and civil servants still require technical data and legal advice in more traditional forms, but the channels to this audience were not considered those most in need of renovation.) 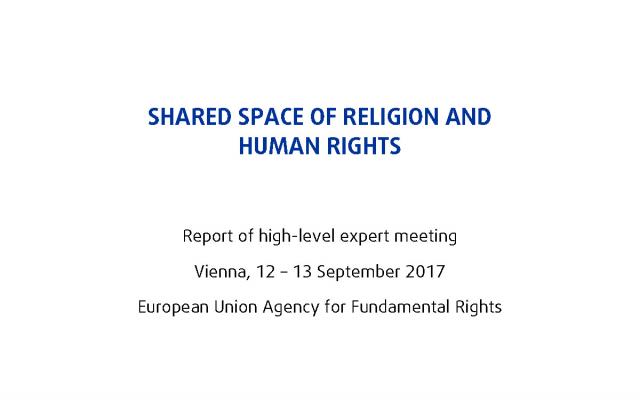 This meeting report distils the discussions held during a high-level expert meeting organised by FRA, which explored the shared space between religion and human rights.