A child’s right to be heard is understood as the child’s legal entitlement to present his or her opinion directly to a judge if he or she so wishes. Some Member States set minimum age requirements for this right in the framework of judicial proceedings on adoption.

Age requirements differ remarkably among EU Member States, but also within Member States across different areas of regulation (for instance, family, criminal and asylum law). However, in some countries, even if an age requirement applies to the right to be heard, a court may nonetheless ask for a child’s opinion, regardless of the child’s age.

FRA analysed age requirements applied in seven areas. The data on adoption, placement, employment, asylum and immigration are presented in this web-publication. 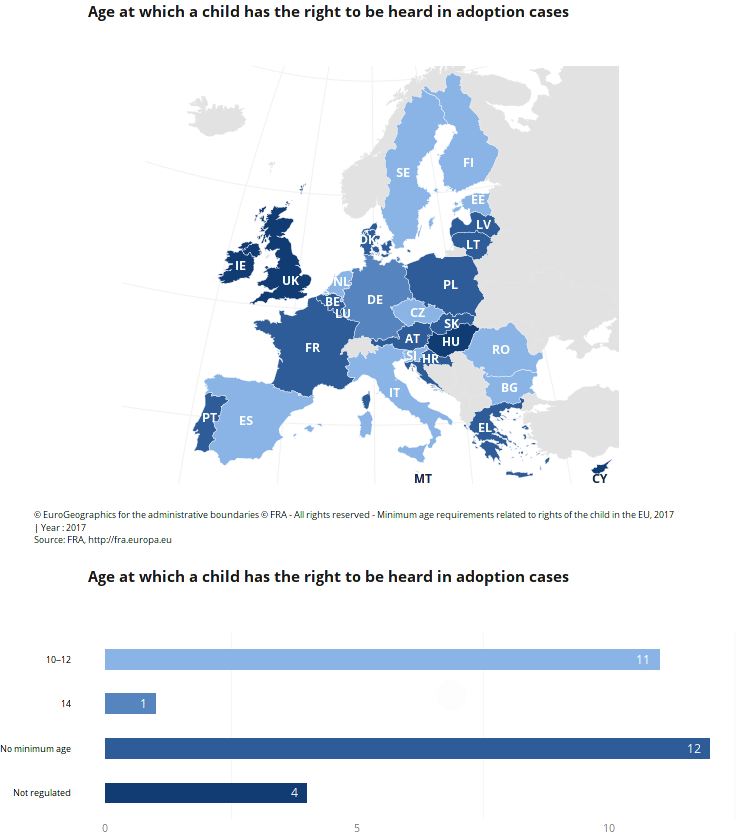 Children’s right to be heard in judicial proceedings is enshrined in both the Convention on the Rights of the Child (CRC) and the EU Charter of Fundamental Rights. Article 12 (2) of the CRC stipulates that “the child shall in particular be provided the opportunity to be heard in any judicial and administrative proceedings affecting the child, either directly, or through a representative or an appropriate body, in a manner consistent with the procedural rules of national law”. In Article 12 (1), children’s right to be heard is linked to their capacity to form their own views in accordance with their “age and maturity”. Article 24 of the Charter provides that the freely expressed views of children “shall be taken into consideration on matters which concern them in accordance with their age and maturity”.

In this framework, the Directive on procedural safeguards for children suspected or accused of crime aims to ensure that they have the right to be present at their trial, participate effectively in the trial, and have the opportunity to be heard and express their views (Article 16). A similar rule also applies for child victims of crime according to Article 10 of the Victims’ Rights Directive, in “due account” of the child’s age and maturity. Recital 42 of the directive underlines that the child victim’s age cannot be the sole basis for precluding the child’s right to be heard. In addition, the need to take into account the child’s views, needs and concerns is also mentioned in other sectoral directives, such as Directive 2011/93/EU on combating sexual abuse, sexual exploitation of children and child pornography (Article 19) or Directive 2011/93/EU on anti-trafficking (Article 14). In civil matters, Regulation Brussels II bis includes disrespect for a child’s right to be heard among the grounds for non-recognition of judgments relating to parental responsibility (Article 23). Respect of the child’s right to be heard is also a condition for the recognition and enforceability of other family law related judgments – for instance, concerning the rights of access to and return of a child (Articles 41 and 42).

However, EU legislation sets no explicit minimum age for the right of children to be heard in judicial proceedings. It therefore lies within the competences of Member States to lay down their own rules in this area. When exercising their powers, Member States are bound to respect the essence of children’s right to be heard, as provided for in the CRC and the EU Charter of Fundamental Rights, also taking into consideration that it constitutes a core dimension of access to justice.