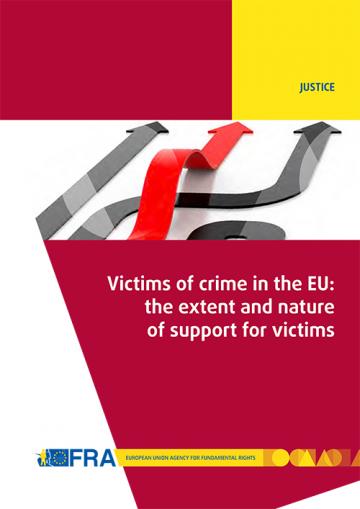 Well-resourced, well-aimed victim support is vital to ensure that victims of crime have real access to justice for the suffering they have been caused and ensure their rights are respected. In the first comprehensive assessment of victim support services throughout the European Union, published today, the EU Agency for Fundamental Rights (FRA) notes that despite improvements, challenges remain in many Member States.

Access the report: Victims of crime in the EU: the extent and nature of support for victims >>

“Assistance must be made available to victims before, during and after criminal proceedings – and not only legal support, but also psychological and emotional,” says FRA Director Morten Kjaerum. “In 10 months EU Member States must have transposed the EU Victims’ Directive into national law, and there is still a lot to be done.”

To help ensure effective support for victims throughout the EU, FRA makes a number of suggestions in the report, for example:

FRA research has consistently found that underreporting is a major obstacle to ensuring victims have full access to their rights. Targeted and practical victim support systems are a crucial element of any strategy to increase trust in the authorities and increase reporting rates, without which it is impossible to improve the investigation and prosecution of crime. In this regard, the Victims’ Directive, or Directive establishing minimum standards on the rights, support and protection of victims of crime is a big step forward. Member States must transpose the articles of the Directive by 16 November 2015.

The subject of victim support is closely linked to FRA’s other work on access to justice, discrimination and hate crime, and particularly to the findings of the Agency’s large scale surveys of people who are most often victimised. The results of this work can be found in publications such as the LGBT report, discrimination and hate crime against Jews, or Violence against women.

For today’s report, FRA has collected data from all 28 Member States in order to provide information and analysis on current procedures at national level. The publication demonstrates that despite the many challenges, there have been a number of positive developments across Member States. Many of these are listed in the report as promising practices. For example:

The report is available here: Victims of crime in the EU: the extent and nature of support for victims

The Victims’ Directive is just one element of the broader Victims’ Package. Two other pieces of legislation that make up the Package will enter into force on 11 January 2015, which ensure crime victims who are granted protection in one EU country will be eligible for similar protection in another Member State.