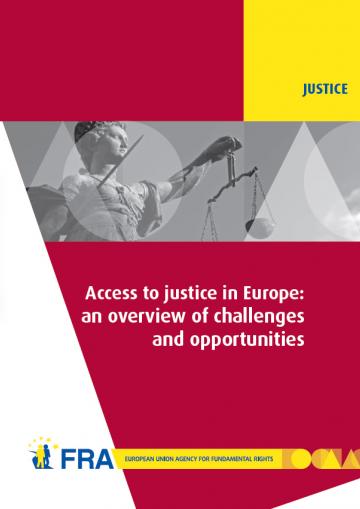 Business activity affects not just customers, employees, and contractors along supply chains, but often entire communities and the environment. This makes it vital that every business complies with human rights. This comparative report looks at the realities victims face when they seek redress for business-related human rights abuses. It presents the findings of fieldwork research on the views of professionals regarding the different ways people can pursue complaints. The findings highlight that obstacles to achieving justice are often multi-layered.
Read news item
Report / Paper / Summary
Justice, victims’ rights and judicial cooperation
Civil justice
6
December
2012

The principle of non-discrimination is firmly established in European Union (EU) legislation and includes provisions relating to access to justice. This report examines the process of seeking redress in cases of discrimination. It provides a detailed analysis of what the EU Member State bodies that deal with cases of discrimination do to support possible victims of discrimination and to offer them redress. It examines the factors obstructing effective remedies, such as the complexity of the complaints system, which discourage people from bringing cases and reinforce victims’ feelings of helplessness
In brief / Factsheet
Justice, victims’ rights and judicial cooperation
23
March
2011

According to international and European human rights law, EU Member States must guarantee everyone the right to go to court, or to an alternative dispute resolution body, and to obtain a remedy when their rights are violated. This factsheet provides information on access to justice, focusing on non-discrimination law, excluding criminal law.

According to international and European human rights law, EU Member States must guarantee everyone the right to go to court, or to an alternative dispute resolution body, and to get a remedy where their rights are violated. This is the right of access to justice. Without it, a victim is not able to enforce their rights or put right the damage suffered.

Find more details in the full report and factsheets downloadable below.