In the context of this research, access to justice means that an individual is able to bring a complaint to redress mechanisms if they feel they have been prevented from exercising the right to political participation. Different redress mechanisms may be able to receive complaints in this area, including non-judicial institutions such as national human rights institutions, equality bodies and ombudsperson organisations, as well as the civil judicial system.

This indicator explores whether all persons with disabilities are able, by law, to access redress mechanisms in cases where they have not been able to exercise the right to political participation. In particular, it looks at whether people who have been deprived of their legal capacity are entitled to access justice in such instances.

Are all persons with disabilities legally able to access complaints mechanisms if they have not been able to exercise the right to political participation? 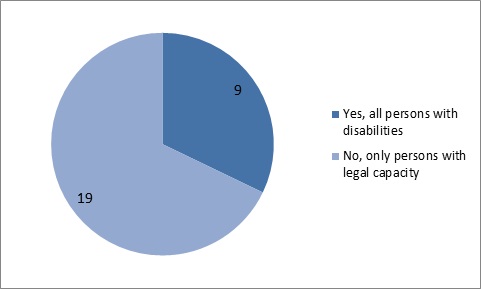 The results for this indicator in many cases mirror those for the indicator on whether persons deprived of legal capacity are able to vote and stand for election. Laws in force in Austria, Croatia, Cyprus, Finland, Germany, Italy, Latvia, Malta and the United Kingdom provide that all persons with disabilities, including those who have been deprived of their legal capacity, have access to redress mechanisms in cases where they have not been able to exercise their right to political participation.

Legislation in the second group of Member States – Bulgaria, France, Hungary, Luxembourg, the Netherlands and Sweden – requires that a guardian makes a complaint on behalf of a person deprived of legal capacity who is seeking redress. In France, for example, the law stipulates that even if persons deprived of legal capacity are allowed to vote they cannot seek redress themselves: their guardian needs to make the complaint on their behalf.

In many cases, being able to access justice depends on whether the case falls within the mandate of the redress mechanism approached. In Sweden persons with disabilities, or their guardian if they have been deprived of legal capacity, can only make a complaint to the Equality Ombudsman if the issue is framed in discrimination terms, as the Ombudsman is only competent to act in areas covered by the Discrimination Act. Inadequate accessibility, for example, is not included in the Discrimination Act, so a case could not be brought on this basis.
Downloads
04 July 2014
Legally able to access complaints mechanisms - Indicators on political participation of persons with disabilities (82.26 KB)
Language
English