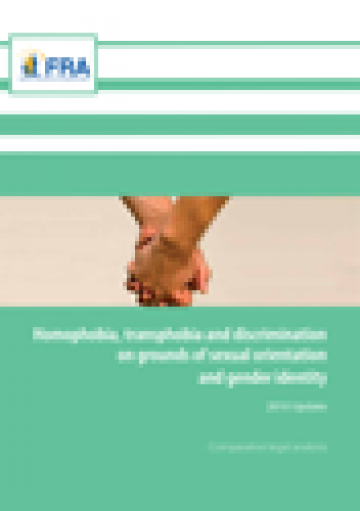 Today the European Union Agency for Fundamental Rights (FRA) presents its report on Homophobia, transphobia and discrimination on grounds of sexual orientation and gender identity to Members of the European Parliament. The FRA report reveals that in some EU Member States, legislation and practice is increasing the protection of lesbian, gay, bisexual and transgender (LGBT) persons, while in others the rights of LGBT persons are being restricted or neglected. This creates an uneven landscape in the protection of LGBT rights throughout Europe.

This report answers a European Parliament request to examine the situation of lesbian, gay, bisexual and transgender (LGBT) persons in depth, following restrictive legislation on their rights in certain EU Member States.

The FRA report highlights three underlying problems faced by LGBT persons in the EU: that they are forced to live in silence and invisibility, suffer violent attacks, and are not treated equally, for example at work, by landlords or when moving around the EU.

FRA Director Morten Kjaerum: "Our research identified positive developments as well as areas where either little has changed since our last study in 2008, or has changed for the worse. For instance, an increased number of EU Member States recognise the right to marriage to same-sex couples to marry while others do not recognise this right. This, in turn, has legal and practical implications for citizens wanting to move between EU countries. Negative attitudes and stereotyping appear as common roots for inaction or negative developments observed in a number of Member States in our report".

"Our recommendations to the Commission and to the Parliament are very clear: actually follow the road-map set up by the FRA. The main opinions included in this (FRA) report would really correspond to the main priorities that ILGA Europe has at the European Union level." Evelyne Paradis, Executive Director of ILGA-Europe (Intergoup on LGBT rights podcast interview).

The legal trends cover the following areas: legal protection against discrimination, freedom of assembly and of expression, hate speech and hate crime, the meaning of 'family member' for the purpose of free movement, asylum and protection of LGBT people, and the possibility and requirements for transgender people to access gender reassignment treatment, and to have their gender reassignment recognised in law.

Watch the press conference with FRA Director Morten Kjaerum and Raül Romeva i Rueda - rapporteur on the equal treatment directive.

Download the podcast interview of Morten Kjaerum, Director of the European Union's Fundamental Rights Agency, and Evelyne Paradis, Executive Director of ILGA-Europe on the new FRA legal report "Homophobia, transphobia and discrimination on grounds of sexual orientation and gender identity."