Racism, discrimination, intolerance and extremism: Learning from experiences in Greece and Hungary 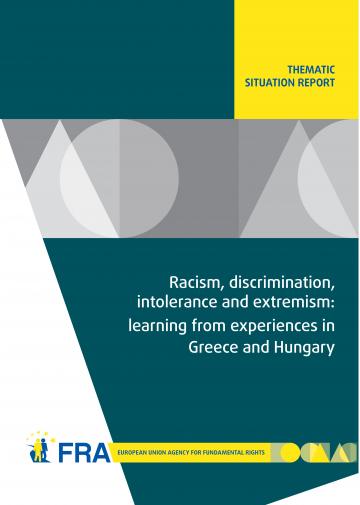 Racism, discrimination, extremism and intolerance currently pose a great challenge for the European Union. In a new report, the EU Agency for Fundamental Rights examines the responses of two Member States, taking these countries as case studies to demonstrate the need for more targeted and effective measures to combat these phenomena throughout the EU. The report ends by proposing a number of steps to improve the situation.

Today’s publication, a thematic situation report, also addresses a phenomenon currently unique to Greece and Hungary. This is the significant parliamentary presence of political parties standing for and promoting an extremist ideology that particularly targets irregular migrants (in Greece) and the Roma and Jews (in Hungary), and which are either themselves or have links to paramilitary organisations committing racially motivated acts of violence.

The EU and its Member States already have strong legislation in place to fight racism, intolerance and extremism. However, greater efforts are needed to ensure effective implementation. In addition, more needs to be done, particularly at local level, to foster social cohesion and increase trust in the police and other law enforcement authorities.

The overall aim of this report is to provide a better understanding of the barriers to combating racism and intolerance, and fulfilling fundamental rights throughout the EU. The proposals contained in the final section of the report are therefore relevant for all Member States when developing their own strategies for combating racist discrimination and violence, as well as the emergence of extremist ideologies on the political scene.