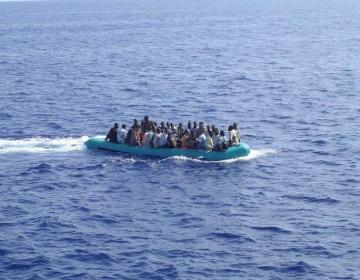 The recent tragedy off Italy in which at least 92 people have died after a boat carrying African migrants sank, underscores why all possible efforts should be made to reduce the need for people to take such dangerous journeys, given the high risks of sea crossings.

According to Italian officials over 140 have been rescued but hundreds are still missing. It is one of the worst such disasters to occur off the Italian coast in recent years.

Each year, hundreds of men, women and children board overcrowded and ill-equipped boats in an attempt to reach Europe. They may be fleeing violence and persecution or seeking improved opportunities for themselves and their families. Many do not survive the trip, never reaching their destination, as the recent example off the coast of the Italian island of Lampedusa stands testament.

FRA’s report ‘Fundamental rights at Europe’s southern sea borders’ looked at the deficiencies, promising practices and challenges of protecting fundamental rights at the EU’s southern sea borders. It described the hazardous journey and deaths at sea, discussed current maritime surveillance mechanisms and cooperation with third countries, and detailed the treatment of migrants when they arrive on shore.

The report noted that such hazardous crossings began in the late 1980s, when European countries tightened immigration policies, making it more difficult to enter such countries in a regular way. Since then, the EU has established common rules on border management and also offered, through Frontex, the EU’s border agency, operational support to EU Member States.

Nonetheless, as the report findings show migrants who put their lives at risk by crossing the sea in unseaworthy boats to reach southern Europe represent an alarming and unresolved chink in the EU’s protection of core rights of individuals. This underlines why all possible efforts should be made to reduce the need for people to take such a dangerous journey. This could include reinforcing EU efforts to strengthen protection of migrants waiting to leave for Europe in so-called ‘transit’ countries in close collaboration with the UN. Such efforts should focus on establishing effective asylum systems. In addition, the European Asylum Support Office should use its mandate to cooperate with third countries with a view to supporting their asylum and reception systems as well as implement actions aimed at finding durable solutions for refugees.

At the same time, there is an urgent need for ensuring that when the new Eurosur surveillance system will be established, Member States do their utmost to maximise its life-saving potential by facilitating the early detection – and hence early rescue - of boats in distress at sea, thus making it possible to avoid the tragic loss of life in cases such as Lampedusa. Eurosur will be a platform for exchanging information and cooperation between Member States and Frontex. It will have two objectives: combatting irregular immigration; as well as protecting and saving the lives of migrants.