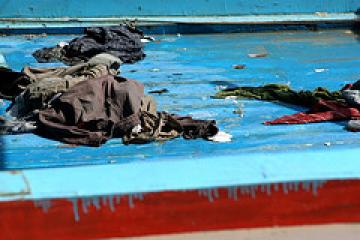 Many migrants drowned in the recent tragedies in the Mediterranean Sea. The frequency of such tragic events points to the urgent need for Member States and the European Union to work together to safeguard the lives and rights of migrants.

“Far too many migrants are dying as they escape persecution or simply seek a better life,” said FRA Director Morten Kjaerum, during a two-day visit to Rome where FRA discussed cooperation with Italy as it prepares for its Presidency of the Council of the EU, beginning on 1 July. “Recognising the efforts that have been made by the Italians, no one country can solve the issue alone. Europe needs to act together to find long-term comprehensive solutions that will address all aspects of migration from cause to effect”.

The Italian coastguard, through the Mare Nostrum initiative, has already saved thousands of lives of those in peril on the seas surrounding the EU’s external borders. However, such short-term actions are insufficient to address fundamental rights emergencies as EU Agency for Fundamental Rights (FRA) pointed out in its report on Fundamental rights at Europe’s southern sea borders. Unless structural solutions and actions adopted at EU level are fully implemented, more tragedies are likely to occur. This also means that the EU should review its legislation to combat human smuggling as outlined by FRA in its 2014 paper on Criminalisation of migrants in an irregular situation and of persons engaging with them. This is an important aspect of the European Commission’s ‘Task Force Mediterranean’, which was set up following the deaths of almost 400 people off the Italian island of Lampedusa in October 2013.

In light of the Mediterranean Task Force recommendations, and FRA findings from its work on migration, the EU needs a more comprehensive approach leading to a joint commitment by all Mediterranean coastal and other interested States to address unsafe migration by sea. This would include:

FRA will support the Italian Presidency to help move the EU migration agenda forward. As part of this, FRA’s flagship event this year, its Fundamental Rights Conference will focus on fundamental rights in the area of migration, integration and border management. The event will take place in Rome on 10-11 November.