Marriage with consent of a public authority and/or public figure

It is up to each Member State to legislate in regards to the right to marry, as established in Article 9 of the EU Charter of Fundamental Rights. The European Convention on Human Rights guarantees the right to marry for those of ‘marriageable age’ according to national laws (Article 12). In General Comment No. 4, the CRC Committee recommends setting the minimum age for marriage with and without parental consent to 18 years, for both girls and boys.

However, most national legislation allows children to marry at a younger age with the consent of a public authority and/or the consent of their parents. This lower age is mostly set at 16 years. Seven Member States have not regulated any lower age for these exceptions. 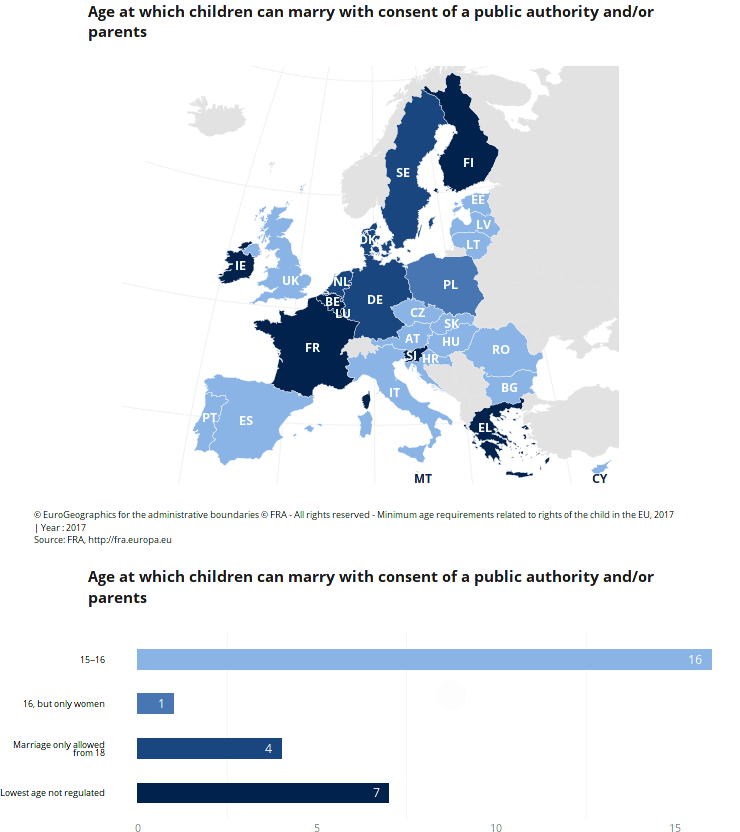 Latest developments: In Finland, policymakers are assessing whether to set an absolute minimum age for marriage, without any room for dispensation. In Ireland, a bill proposes to remove all exemptions that currently enable children to marry.

Type of consent required for children to marry

The UN Convention on Consent to Marriage, Minimum Age for Marriage and Registration of Marriages states that all States parties shall “specify a minimum age for marriage and that no marriage shall be legally entered into by any person under this age, except where a competent authority has granted a dispensation as to age, for serious reasons, in the interest of the intending spouses” (Article 2).

The Joint General Recommendation/General Comment No. 31 of the Committee on the Elimination of Discrimination/General Comment No. 18 of the Committee on the Rights of the Child on harmful practices clarifies that “child marriage is considered to be a form of forced marriage, given that one and/or both parties have not expressed full, free and informed consent” (para. 20). Clear rules related to exceptions permitting marriage for persons under 18 years are essential to ensure that Member States and the EU safeguard the free will of the child and to combat forced marriage, which qualifies as a form of gender-based violence under the Victims’ Rights Directive (2012/29/EU). (See also FRA’s publication Addressing forced marriage in the EU: legal provisions and promising practices). Furthermore, in view of the migration situation in the EU, this issue is increasingly significant in terms of recognition of third-country child marriages as well as of child marriages in a Member State other than the Member State of residence or relocation.