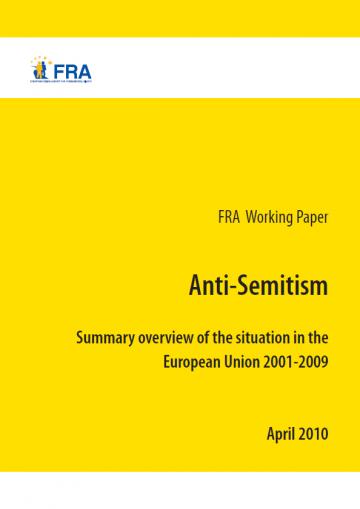 Equality, non-discrimination and racism
The European Union Agency for Fundamental Rights (FRA) presents its 6th update of its 2004 report "Manifestations of Antisemitism in the EU".
Downloads
10 August 2012
Antisemitism - Summary overview of the situation in the EU 2001-2009 - April 2010 (468.53 KB)
Език
English

The European Union Agency for Fundamental Rights (FRA) presents its 6th update of its 2004 report "Manifestations of Antisemitism in the EU". This update contains the latest governmental and non-governmental statistical data covering 2001 to 2009 for those EU Member States that have official or unofficial data and statistics on Antisemitic incidents.

The Agency's data collection work shows that most Member States do not have official or even unofficial data and statistics on Anti-Semitic incidents. Even where data exist they are not comparable, since they are collected using different definitions and methodologies. For some countries, RAXEN National Focal Points provide the Agency with lists of cases collected either ad hoc by civil society organisations or through the media with varying degrees of validity and reliability. Detailed data and incident lists can be found in the Agency's InfoPortal.

The FRA collects regularly through its Racism and Xenophobia Network (RAXEN) and analyses publicly available official and unofficial data and information on racism and xenophobia with a special focus on antisemitism.