Assessing whether alleged violations of a particular right have been considered by judicial complaints mechanisms can give an insight into whether systematic violations are occurring, the accessibility of judicial redress mechanisms and the current relevance or profile of the issue. This indicator establishes whether national judicial redress mechanisms addressed cases concerning an alleged violation of the right to political participation of a person with a disability over the period 2000–2013. The scope of this research means that the cases identified were heard by higher level courts. There may be other cases considered by lower or regional courts that are not captured here. More information on the cases identified by this research can be found in Annex 3 of the report.

The existence of cases in a country does not imply that the situation regarding the political participation of persons with disabilities is less favourable than in a country with no identified cases. It may rather reflect greater awareness of rights among persons with disabilities, for example, or more accessible judicial processes. This data should be read in conjunction with the indicator on cases before non-judicial redress mechanisms.

Have national courts considered cases related to the right to political participation of persons with disabilities? 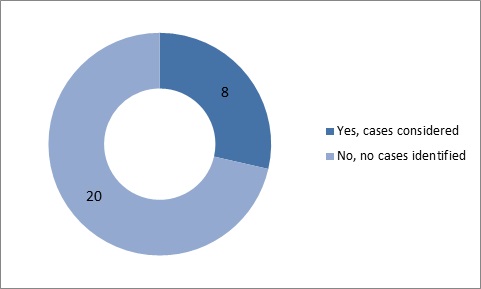 The analysis identified that cases concerning the right to political participation of persons with disabilities had been considered by judicial redress mechanisms in a quarter (8) of EU Member States. Of the twelve cases identified; five focused on the voting rights of persons deprived of their legal capacity. In 2011, for example, the Constitutional Court of the Czech Republic ruled that when deciding on full or partial deprivation of the legal capacity of an individual, courts must consider separately whether the individual is capable of understanding the meaning, purpose and consequences of voting and the judgment of depriving an individual of the right to vote must be reasoned. A Council of State Administrative division in the Netherlands concluded in a 2003 case, that the exclusion of persons deprived of their legal capacity from the right to vote could, in specific cases, be an infringement of the International Covenant on Civil and Political Rights.

The remaining cases predominately concerned questions of the accessibility of polling stations and voting materials. In Slovenia, the Constitutional Court in 2010 rejected a complaint challenging the requirement to submit an application to use an accessible polling station three days before elections as unfounded. In his application, the claimant had specifically mentioned the principle of non-discrimination on the grounds of disability and the right to political participation on an equal basis with others outlined in the CRPD. In addition, a decision of the Polish Supreme Court in 2000 regarding accessibility of polling stations at the Polish consulate in Rome found that not providing access to polling stations amounted to a violation of the Act of Presidential Election.

Several judgments specifically addressed accessibility for persons with visual impairments. In Spain the High Court of Catalonia ruled in 2007 that the fact that the law on the general electoral system did not allow blind people to vote using Braille was not unconstitutional, because it would entail complex technical solutions. The law on the general electoral system was amended shortly afterwards to introduce a specific voting procedure for persons with visual impairments. Before the 2008 General Election in Malta, the Society of the Blind opened a case regarding the right of persons with visual impairments to vote in secret, arguing that the lack of privacy was humiliating and in breach of Malta’s equality legislation. Although the court ruled that it did not have jurisdiction in the case, the General Elections Act was subsequently amended to include an obligation on the Electoral Commission to produce templates in Braille and facilitate the use of playback listening devices.