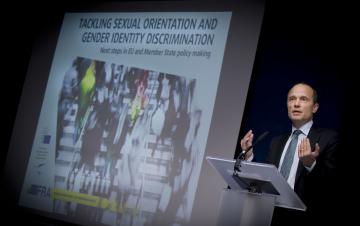 “The EU has a clear responsibility to promote equality, respect and tolerance for everyone, including LGBTI people,” says Ivan Scalfarotto, Undersecretary of State of the Italian government. “With this important conference the Italian Presidency wants to show its commitment to working with our EU partners to combat LGBTI discrimination and build a more inclusive society for all.”

“Too often, too many LGBTI people face discrimination and hostility for simply being themselves,” says FRA Director Morten Kjaerum. “The tides is changing and there has been positive momentum in many Member States. We must build on this. As the new European Parliament and Commission take office, the time is now ripe to put equality and non-discrimination of LGBTI people back on the EU’s agenda.”

The conference aims to support the further development of policy responses by the EU and its Member States to address the fundamental rights challenges faced by LGBTI people in their daily lives, including hostility, hate crime, discrimination and bullying. It builds on the results of FRA’s EU LGBT survey and other studies that revealed the extent of discrimination and hate crime that LGBTI people face regularly at home, at work and in public.

Many EU Member States have moved forward and have adopted legislation and policy measures that have improved the situation of LGBTI people. For example:

However, in practice hate crime, bullying and discrimination remain major problems for many LGBTI people. Comprehensive concrete legislative and non-legislative measures at the EU and national level are needed to improve the situation so all LGBTI people can live their lives in dignity and with respect.

Over 400 decision makers and fundamental rights’ practitioners from across the EU are gathering to discuss how equality policies in different areas of the EU’s competence can be further strengthened and mainstreamed and what Member States can do to help. The results of such discussions will be a useful contribution to the broader equality and non-discrimination high-level event organised by the European Commission and the Italian Presidency that will take place in Rome from 6 to 7 November.