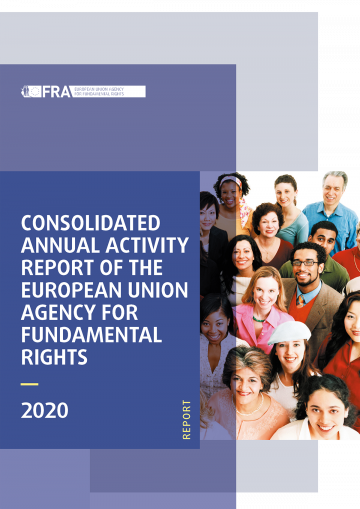 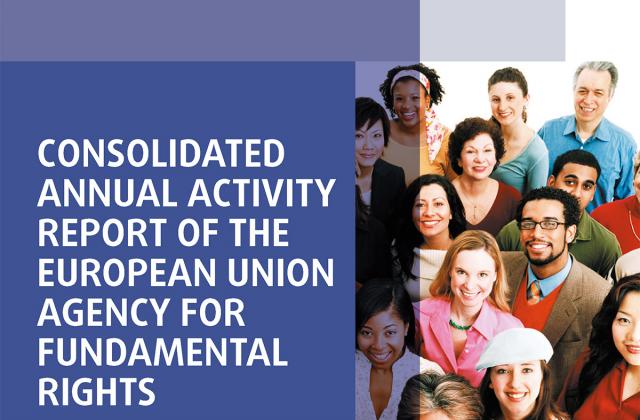 This report contains a comprehensive and thorough account of the activities carried out by FRA in the implementation of its mandate and programme of work during 2021. It provides a detailed account of the results achieved in relation to the objectives set out in the annual work programme for 2021 and the five strategic areas defined in FRA’s strategic plan 2018–2022, of the financial and management information, and of the risks related to the organisational activities and measures. 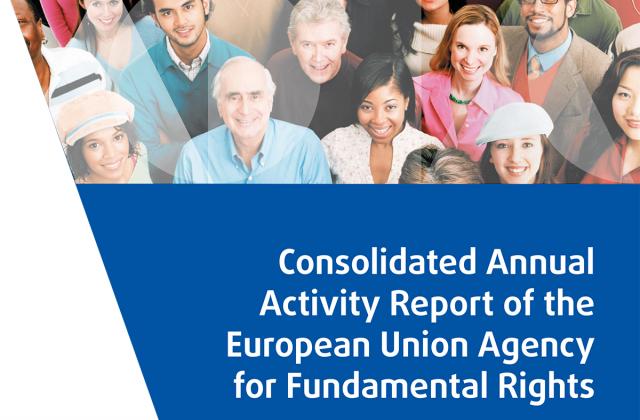 The Consolidated Annual Activity Report (CAAR) 2019 provides an overview of the activities and achievements of the European Union Agency for Fundamental Rights (FRA) in that year. It follows the guidelines established by the European Commission. 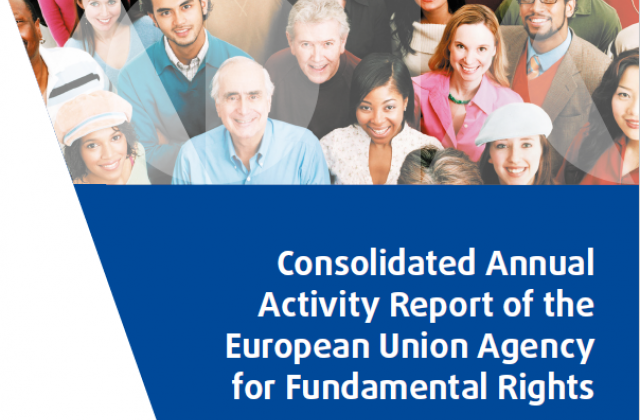 The Consolidated Annual Activity Report (CAAR) 2018 provides an overview of the activities and achievements of the European Union Agency for Fundamental Rights (FRA) in that year. It follows the guidelines established by the European Commission. 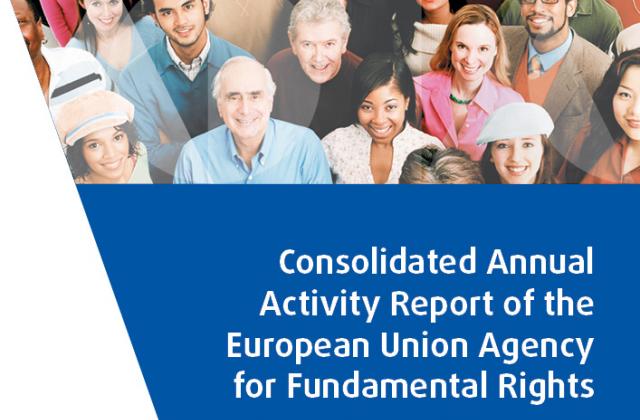 The Consolidated Annual Activity Report (CAAR) 2017
provides an overview of the activities and achievements
of the European Union Agency for Fundamental
Rights (FRA) in that year. It follows the guidelines of
the European Union (EU) Agencies Network.
Overview

Overall, FRA’s data collection and analysis activities were regarded as the most relevant aspect of its work in 2020 in terms of contributing to the current European Union (EU) policy context and fundamental rights challenges. FRA’s extensive surveys on the discrimination of marginalised groups and the Fundamental Rights Survey have formed the basis of a number of strategies.

FRA published findings from the 2019 survey on discrimination, violence and hate crimes against lesbian, gay, bisexual, trans and intersex (LGBTI) people, the largest such survey ever carried out worldwide. The survey was referenced in 32 academic journal articles in 2020. The European Commission’s upcoming EU Roma strategic framework for equality, inclusion and participation and the new EU strategy on LGBTIQ equality were based on the survey findings.

Furthermore, through the Roma and Travellers Survey, FRA developed estimates on the life expectancy of Roma and Travellers for the first time. FRA cooperated with several national statistical institutions to build data collection and monitoring capacity at the country level.

Contributing to better law-making and implementation with independent advice

Overall, FRA’s activities contributing to better law-making and implementation were regarded as highly relevant for FRA stakeholders in 2020. FRA was highly influential across its many areas of activity, particularly in providing legislative and policy advice to EU and national stakeholders on matters relating to the rights of the child; asylum, migration and borders; and equality and non-discrimination. For instance, FRA identified 20 good practices in the field of asylum, migration and borders in 2020.

FRA continued to strengthen its role as an independent core actor informing EU law, despite the adverse circumstances brought about by the coronavirus disease 2019 (COVID-19) global pandemic, by participating in 205 hearings and presentations. FRA also provided its expertise directly to EU institutions, responding to 14 requests for opinions. Most of these requests were in relation to non-discrimination issues, such as work on the implementation of the Racial Equality Directive.

FRA also extended its fundamental rights advice to other EU agencies, such as the European Border and Coast Guard Agency (Frontex); the European Union Agency for the Operational Management of Large-Scale IT Systems in the Area of Freedom, Security and Justice (eu-LISA); and the European Asylum Support Office (EASO). For example, FRA renewed its service-level agreement with Frontex in 2020, assisting it with the deployment of 40 fundamental rights monitors across its operations. FRA also played a vital role in contributing to EU priorities through its influence on EU law and policy, including work on digital rights by contributing newer EU legislative initiatives pertaining to artificial intelligence and fundamental rights.

FRA responded to the COVID-19 pandemic by publishing six bulletins, which provided a timely and comprehensive overview of the fundamental rights implications of national measures adopted across the EU to safeguard citizens from the virus. The bulletins were downloaded over 12,000 times within 28 days of publication, with the first bulletin being the second most used FRA publication of the year. Emerging findings from an independent evaluation of the bulletins note that they were effective in their reach and scope and that the bulletins were used and referenced by stakeholders and in academic journal articles.

FRA also responded to the COVID-19 pandemic by contributing to conversations on the economic and societal challenges brought about by the pandemic, on integration and migration against the background of the pandemic and on the future of the European Disability Strategy.

Furthermore, child protection remained one of FRA’s priorities during 2020. FRA contributed to child protection policy by providing guidance on standard operating procedures for the relocation of unaccompanied children to other EU Member States, implementing training modules in this area and reacting to several fundamental rights challenges in Greece, including the closure of its land borders, suspension of access to asylum and the Mória Refugee Camp fire.

FRA’s activities in the promotion of fundamental rights, values and freedoms were considered very relevant by FRA stakeholders.

FRA engaged in a number of awareness-raising activities in 2020 aimed at fostering a culture of protecting, promoting and fulfilling fundamental rights in the EU. FRA continued its awareness-raising activities on the EU Charter of Fundamental Rights and published its Fundamental rights report 2020, which summarised and analysed the major human rights developments and challenges in the EU in 2019.

FRA’s Fundamental rights report 2020, together with FRA’s opinions, were downloaded more than 8,400 times. FRA also contributed to raising awareness on fundamental rights at the EU’s external borders through the publication of a report on fundamental rights compliance at the EU’s external land borders, requested by the European Parliament. FRA also continued to contribute in 2020 to discussions on how to communicate rights more effectively through the provision of training sessions and participation in webinars and events, where it presented and applied the 10 keys to effectively communicating human rights. To achieve a higher level of awareness of human rights, FRA continued to work closely with the European Commission, Member States, national human rights institutions (NHRIs), civil society and international organisations (i.e. the Office of the United Nations High Commissioner for Human Rights, Council of Europe, Commissioner for Human Rights of the Council of Europe, Organization for Security and Co-operation in Europe, Office for Democratic Institutions and Human Rights, European Network of Equality Bodies and European Network of National Human Rights Institutions).

FRA also adapted quickly to the COVID-19 pandemic, delivering several of its awareness-raising activities, events and training sessions online. FRA still topped the ranking for print dissemination through the Publications Office of the EU website in 2020. FRA's media references and social media footprint have been growing over recent years. FRA recorded 11,000 new followers on LinkedIn and 12,000 new followers on Twitter and Facebook in 2020. FRA’s media outreach has also increased considerably, with more than double the number of media mentions in 2020 compared with 2019 and with 40 countries reporting on FRA in the media in 35 different languages. FRA’s work was also referenced in 25 documents of the Council of the European Union and 85 documents of the European Parliament.

FRA stakeholders highly valued FRA’s work in 2020 on strengthening cooperation with national and local fundamental rights actors. Throughout the year, FRA increased its knowledge and data on national human rights action plans. In addition, in 2020, the agency made available a report on national human rights action plans in the EU and published key findings from its 2019 survey on Roma and Travellers in six countries.

Throughout 2020, FRA also contributed to fostering the creation of an enabling civic space and strengthening human rights capacities in EU Member States, primarily through its work with NHRIs and cooperation with civil society organisations through the Fundamental Rights Platform. FRA published a report in 2020 entitled Strong and effective national human rights institutions – challenges, promising practices and opportunities, which analyses the situation of NHRIs across the EU, North Macedonia, Serbia and the United Kingdom. FRA also contributed to a revised Council of Europe recommendation on NHRIs and continued its work on fundamental rights at local level by providing support to cities to become human rights cities. In addition, FRA contributed around 20 submissions to the United Nations and Council of Europe monitoring bodies responsible for reviewing Member States.

Drawing on its expertise in data collection covering different fundamental rights, in 2020 FRA provided assistance and methodological advice to Bulgarian authorities on how to generate data and populate indicators on hard-toreach populations at risk of rights violations and on how to use human rights indicators to monitor the implementation of the Convention on the Rights of Persons with Disabilities. FRA plans to extend the methodological advice provided to Bulgaria to other Member States in 2021.

In accordance with the terms of its statutory governance, FRA conducts its operations in compliance with the applicable laws and regulations, by working in an open and transparent manner and meeting the high level of professional and ethical standards expected of an EU agency.

To ensure the achievement of policy and management objectives, FRA has adopted a set of internal control principles based on international good practices.