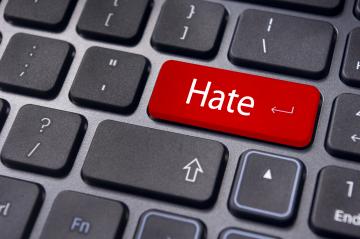 Shutterstock
Violence and offences motivated by racism, xenophobia, religious intolerance, or by bias against a person’s disability, sexual orientation or gender identity are all examples of hate crime.

These crimes can affect anyone in society. But whoever the victim is, such offences harm not only the individual targeted but also strike at the heart of EU commitments to democracy and the fundamental rights of equality and non-discrimination.

To combat hate crime, the EU and its Member States need to make these crimes more visible and hold perpetrators to account. Numerous rulings by the European Court of Human Rights oblige countries to ‘unmask’ the bias motivation behind criminal offences.

Efforts to form targeted policies for combating hate crime are hampered by under-recording, ie the fact that few EU Member States collect comprehensive data on such offences. In addition, a lack of trust in the law enforcement and criminal justice systems means that the majority of hate crime victims do not report their experiences, leading to under-reporting. FRA’s work documents both of these gaps in data collection, as well as the extent of prejudice against groups such as Roma, LGBT, Muslims, and migrant communities. At the same time, it makes recommendations on how the situation could be improved.

Article 1 of the EU Charter of Fundamental Rights guarantees the right to human dignity, while Article 10 stipulates the right to freedom of thought, conscience and religion. Article 21 prohibits discrimination based on any ground, including sex, ethnic origin, religion, sexual orientation or disability.

17/01/2020
On 14 and 15 January, FRA, together with the OSCE’s Office for Democratic Institutions and Human Rights (ODIHR), facilitated a workshop for law enforcement officers and officials responsible for (hate) crime registration in Belgium.
11/12/2019
During the second meeting of the European Commission’s antisemitism working group, Member States exchanged best practices and shared experiences of their efforts to prevent, address and respond to antisemitism through education.
11/12/2019
FRA joined the European Parliament Working Group on Antisemitism, the European Jewish Congress and B'nai B'rith International for a mobilising event on 10 December in Brussels.

November
2019
Paper
This annual overview provides an update of the most recent figures on antisemitic incidents, covering the period 1 January 2008 – 31 December 2018, across the EU Member States, where data are available. It includes a section that presents evidence from international organisations. In addition, for the first time, it provides an overview of how Member States that have adopted or endorsed the non-legally binding working definition of antisemitism adopted by the International Holocaust Remembrance Alliance (IHRA) (2016) use or intend to use it.

July
2019
Report
Based on FRA’s second large-scale survey on experiences and perceptions of antisemitism, this report focuses on the perspectives of young Jewish Europeans (aged 16-34) living in twelve EU Member States. It first describes this particular group and takes a look at defining antisemitism and understanding the place of Israel in it.

June
2019
Report
This technical report presents in detail all the stages of the survey and the relevant information needed to assess the quality and reliability of the data, as well as considerations for interpreting the survey results. The following chapters of the report cover the procedures used in the development and administration of the survey.