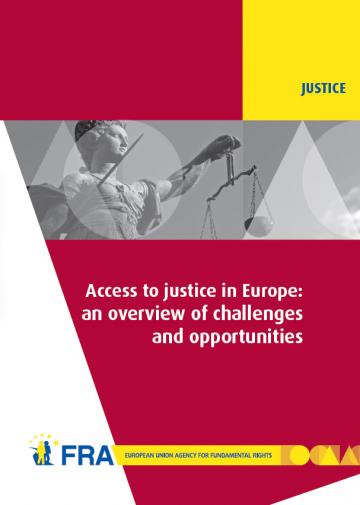 Today, the EU Agency for Fundamental Rights (FRA) is launching its report Access to justice in Europe: an overview of challenges and opportunities. The report will be launched in Budapest at the conference ‘Protecting victims in the EU: the road ahead', hosted by the Hungarian Presidency of the Council of the EU, with the support of the FRA. The report provides a comparative analysis of access to justice across the EU Member States and finds that there are many obstacles that make it difficult for victims to enforce their rights. This report relates mainly to civil and administrative procedures available to victims of discrimination. Although its focus is the area of non-discrimination law, its findings are generally applicable to civil and administrative procedures as a whole.

Access to justice guaranteed by law, but not in practice

FRA Director Morten Kjaerum: "For rights to be made effective, victims need to be able to enforce them by having their cases decided by a court or other similar body. However, FRA research shows that in practice there are a number of barriers to this."

For example, 22 of the 27 EU Member States apply the rule that the losing side in a court case should pay the legal costs of the winning side. The risk of losing puts victims off bringing cases, even if they have a strong claim.

The report also finds promising practices in some Member States, such as:

Related FRA publications on this issue:

Find the full report here: Access to justice in Europe: an overview of challenges and opportunities