Is there a legal duty to provide assistance for persons with disabilities during voting?

Is there a legal duty to provide assistance in voting to persons with disabilities? 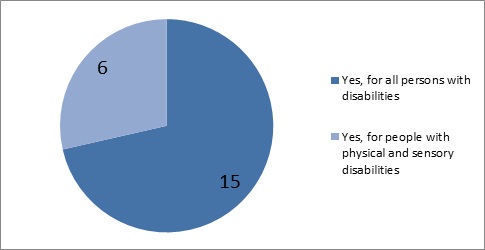 In 15 EU Member States, Croatia, Cyprus, the Czech Republic, Denmark, Finland, Germany, Hungary, Ireland, Luxembourg, Poland, Portugal, Slovakia, Slovenia, Sweden and the United Kingdom, assistance in voting is available to persons with physical, visual and intellectual disabilities, subject to the authorisation of the election authorities. In most of these Member States, this assistance is based on an inability to read or write, independent of the reason. Such legislation often requires, however, that an electoral officer be present in the voting booth with the voter and the assistant, which can raise concerns regarding the secrecy of voting for persons requiring assistance.

In a second group of Member States, made up of Austria, Greece, Latvia, Lithuania, Malta and the Netherlands, electoral laws specify that assistance is only available to persons with physical or sensory impairments. In the Netherlands, the government and Electoral Council have expressed concern that the provision of assistance should not be extended to persons with intellectual disabilities due to the risk of voters being intimidated or influenced by assistants. Self-advocacy organisations have strongly criticised this position, calling for this risk to be addressed in a way that does not obstruct the right of persons with intellectual disabilities to vote.

Where assistance is available, legislation generally allows for it to be provided by a person chosen by the person with a disability. In Malta, however, such assistance can only be provided by electoral officials, a rule which forms part of the basis for the reservation Malta entered to Article 29 when it ratified the CRPD. Conversely, in Croatia, Latvia, Lithuania, Poland and Slovakia, legislation specifically prohibits election officials from providing assistance.