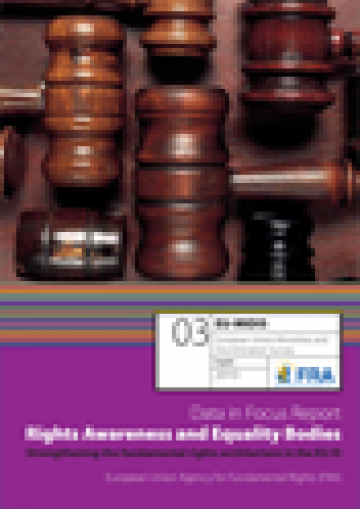 Equality, non-discrimination and racism
Racial and ethnic origin
Religion and belief
Roma
Support for human rights systems and defenders
National human rights systems and bodies
EU-MIDIS "Data in Focus" report 3 focuses on respondents' knowledge about their rights in the field of non-discrimination, including knowledge about Equality Bodies in Member States. This Data In Focus report on 'Rights Awareness and equality bodies' relates to Article 21, on 'non-discrimination', as enrshrined in the Charter of Fundamental Rights of the European Union.
Downloads
10 August 2012
EU-MIDIS Data in Focus Report 3: Rights Awareness (352.86 KB)
Jezik
English
Jezik
French
Jezik
German
Order a printed copy from EU Publications website
Related